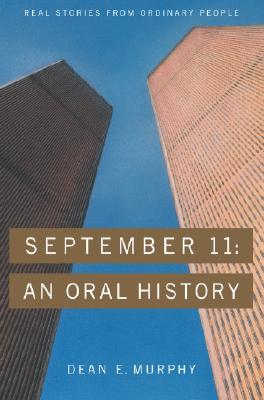 Ahead of reading Garrett M. Graff’s newly-released The Only Plane in the Sky: An Oral History of 9/11 (2019), I decided to take a look at another oral history of the tragedy — one I’d not read before: then New York Times reporter (and now Associate Managing Editor) Dean E. Murphy’s 2002 title September 11: An Oral History. I’m very glad that I did, and for more than a few reasons.

Published a little less than a year after the terrible events of the eponymous date, Murphy’s book is a very different sort of oral history than Graff’s. For one thing, while The Only Plane in the Sky questionably purports to be “the first comprehensive oral history of September 11, 2001” (more on that when I write about the book), September 11 takes the opposite approach. Speaking to CNN at the time of its publication, Murphy explained that he was deliberately not trying to write “the definitive record of 9/11 reminiscences.” The article goes on:

“I view [the book] as a foundation stone,” [Murphy] said. “Decades from now, when someone has a new tidbit, I hope something here can allow them to draw from” [sic].

Generally speaking, I’m wary of attempts at “comprehensiveness” or “definitiveness,” especially when it comes to enormous subjects like the attacks of September 11, 2001: invariably, it seems, projects that claim to include every relevant party wind up excluding some pretty important voices. This is one of the reasons I am personally more inclined toward approaches like Murphy’s. With that being said, I do think September 11 in and of itself makes a compelling case for observing and embracing limitations; it demonstrates the considerable virtues that come with the modest effort of laying a “foundation stone.”

In addition, when examined side-by-side, September 11 and The Only Plane in the Sky helpfully delineate at least two distinct paths of oral history practice that can be found within the world of mainstream book writing. The Only Plane in the Sky is clearly an example of what has been called “oral history as journalism” — or, work that presents a single story pieced together out of snippets from a wide-ranging collection of interviews. September 11, meanwhile, is much more in the vein of literary oral history — or, work which usually looks like an anthology of individual monologues, each with their own unique stories and perspectives.

Admittedly, the line between these two types can sometimes be blurry — it is in September 11, as we will see — but Murphy’s book ultimately has much more in common with works of literary oral history such as Studs Terkel’s Hard Times: An Oral History of the Great Depression (1970) or Wallace Terry’s Bloods: An Oral History of the Vietnam War by Black Veterans (1984) or Svetlana Alexievich’s Voices from Chernobyl: The Oral History of a Nuclear Disaster (2005) than it does with The Only Plane in the Sky or another example of “oral history as journalism.” (I say this despite the CNN article’s perplexing claim that it “is not a Studs Terkel-like collection of interviews.” Murphy’s book might be dissimilar from Terkel’s in terms of content, but definitely not in terms of form.)

September 11 is built around forty-one interviews with survivors of the attacks on the World Trade Center and the Pentagon. Readers will not find any interviews having to do with United Airlines Flight 93, however. (The flight crashed in a field near Somerset County, PA, after the airplane’s crew and passengers struggled to wrest back control from its hijackers.) While including the voices of first-responders, air traffic controllers, family members, locals, and others affected by the crash of Flight 93 might have helped to underscore something about the diverse experiences of that tragic day, their memories would be somewhat dissimilar from those gathered together in Murphy’s book: as he explains in the introduction, it is squarely focused on “eyewitness” accounts. Given each person’s respective proximity to a point of attack, all of the survivors/narrators featured in September 11 are eyewitnesses in the most conventional sense of the word (pg. 5).

Murphy’s approach to interviewing these eyewitnesses hearkens to some longstanding debates about oral history. As a mentioned in my notes on Terkel’s “The Good War”: An Oral History of World War II, popular forms — including but not limited to “oral history as journalism” and literary oral history — are sometimes regarded with suspicion in scholarly circles. Specifically, critics have voiced concerns about the authors’ perceived lack of (academic) rigor, as well as their editing (however judicious). To his credit, Murphy is up-front about his methods (pg. 5):

[These are] first-person accounts of that day, but they are not verbatim transcriptions of tape-recorded conversations. They are mostly composites based on interviews, telephone conversations, e-mail exchanges, faxed letters and documents sent through the postal service. In some cases, people felt more comfortable writing down their thoughts in their entirety than speaking them aloud. In others, they turned to me to make sense out of a series of rambling conversations and written communications that retraced old ground, broke new ground and sometimes went entirely off track.

This may shock the more pedantic historians, but it’s worth pointing out (again and again) that that this does not mean Murphy is playing fast and loose with the verbatim material he has gathered. As he continues (pg. 5):

The flexibility ended, however, when it came to accuracy. I had one uncompromising rule: In their final form, the accounts had to reflect the best and most truthful recollections of the people who told them.

And the proof is in the putting: in each and every case presented in September 11, you can discern the unique “voice” of the narrator — in all of their fascinatingly human unpredictability. Murphy may have taken a stronger hand than usual in the editing process, but the result feels (for lack of a less troublesome word) authentic. There is no obvious authorial embroidery here, nor are there telltale signs of dramatic license; he has clearly been very careful and thoughtful about his work. In fact, Murphy goes on to note that when he would share drafts with the narrators, he often had to curtail their attempts to punch things up. “That could not happen if the history was to be accurate and credible,” he explains. “And in the end, they all concurred” (pg. 6).

This is not to say that September 11 does not include some striking creative flourishes — indeed it does. One especially brilliant device that recurs throughout the book is a kind of seed-planting: a memorably strange or unexplained detail in one narrator’s testimony pays off later in another’s. For example, the first narrator, Teresa Veliz, describes escaping the North Tower of the World Trade Center by going down a stairwell with hundreds of others, and seeing the surreal sight of a blind man and his guide dog among the crowd (pg. 12). Incredibly, Murphy follows her interview with one with that very man (Michael Hingson) and the colleague (David E. Frank) who helped him and his dog escape.

Similarly, many of the civilian narrators recall hearing repeated explosion sounds, unlike those that came from the impact of the planes and the collapse of the towers. For those readers who weren’t physically there — like myself — this is a somewhat mysterious detail. It’s not until fairly late in the book that these explosions are fully explained by Captain Anthony R. Whitaker of the Port Authority Police Department (pg. 188):

There were explosions everywhere. They were causing mass hysteria. Everyone started screaming about car bombs. What it was though, were hot pieces of structural steel from Tower 1 flying through the air like toothpicks. The steel was so hot that when it hit a vehicle it ignited the gasoline.

Ernest Armstead, an emergency medical specialist with the New York Fire Department, further adds in his interview that among those exploding vehicles were at least a couple of police cars and even a fire truck (pg. 154).

Murphy also wisely orients things around geography and (when appropriate) particular ordeals. The book’s sections include “In the North Tower,” “In the South Tower,” “On the Outside,” “To the Rescue,” “Narrow Escapes,” and “In the Pentagon.” Each of these zones of experience has its own unique, shared aspects, as the narrators reveal in their interviews. “In the Pentagon” is the only portion of the book dedicated to what happened in Washington, though it’s more robust that I initially presumed it would be. In fact, the interviews are hugely clarifying about things that are probably comparatively fuzzier in the public consciousness; it may be just one section, but it likely won’t leave readers wanting.

One choice that hasn’t aged especially well, though, is Murphy’s decision to begin each section of the book with a quote from either Rudy Giuliani or George W. Bush. As the de facto spokesmen for the tragedy, this might have made some sense at the time of publication; but today it seems to give their words a kind of authority that they don’t deserve, and to ignore their propagandistic qualities (which where plainly obvious then as now).

Still, this is really the only noticeable blemish. And there is at least one more major strength to be enumerated, and that is the amazingly short time-span in which this book was researched, written, and published. Murphy did all of his preparations, conducted these interviews, and had the book in print within a year of the attacks. This means that the memories, stories, thoughts, and feelings contained in September 11 are alive in a way that they might not have been if the book were written, say, last year. Furthermore, it speaks to his incredible efficacy, resilience, and ability to roll with a colossal story as it unfolds. In this regard, it reminds me of Spike Lee’s masterpiece When the Levees Broke: A Requiem in Four Acts (2006), a massive documentary film in the oral history mode that was miraculously completed by the one-year anniversary of its subject: Hurricane Katrina.

I’ll be interested to see what The Only Plane in the Sky is able to do in terms of illuminating aspects of the attacks of September 11, 2001, that previous histories (including other oral histories) have not been able to illuminate. That said, I’m sort of rooting for it not to become recognized as “the definitive record of 9/11 reminiscences,” if only because I would hate for readers to miss out on existing (and future) oral histories on the subject, including especially September 11. It’s out-of-print as it is — an ignoble fate for what I would say is an essential and irreplaceable document.

Daniel Clarkson Fisher is a Toronto-based writer and educator whose most recent work is the Chinese Jamaican Oral History Project (CJOHP.org), a digital storytelling initiative inspired by his partner Stephanie Lyn and her family. He holds a Master of Fine Arts in Documentary Media from Ryerson University, and is currently a contract lecturer in that program.
View all posts by Daniel Clarkson Fisher →
This entry was posted in Book Notes and tagged Dean E. Murphy, Garrett M. Graff, literary oral history, oral history as journalism, September 11: An Oral History, Spike Lee, Studs Terkel, The Only Plane in the Sky: An Oral History of 9/11, When the Levees Broke: A Requiem in Four Acts. Bookmark the permalink.